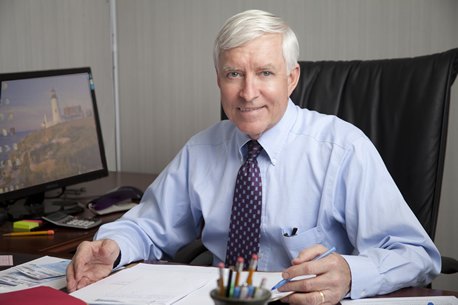 Attorney Herrmann graduated from the College of the Holy Cross in 1975 and he graduated with high honors from the University of Connecticut School of Law in 1979. He has been selected for inclusion in Connecticut Super Lawyers and New England Super Lawyers in the category of General Plaintiff’s Personal Injury. He has received the highest possible rating from fellow attorneys and judges under the Lexis Nexis-Martindale Hubbell peer rating system. He has also been selected by Hartford Magazine as one of the Hartford area’s “best” personal injury attorneys. Attorney Herrmann was a full time faculty member at the UConn Law School where he was a Staff Attorney and Lecturer in Law in the school’s clinic. In addition to teaching, he supervised law students in court appearances.  He attended an intensive three-week training in trial advocacy in Boulder, Colorado presented by the National Institute of Trial Advocacy.  Attorney Herrmann then joined a mid-sized Hartford firm where he litigated a variety of cases, including the defense of personal injury and legal malpractice matters, criminal defense, plaintiff’s personal injury matters and commercial litigation.

Before joining KFG&H in 1989 he worked in a large Hartford firm handling large, complex litigation matters including construction, environmental and commercial cases. He then wished to return to representing individuals, particularly personal injury victims so he joined our firm and has concentrated on just such representation. He has handled a wide variety of cases including wrongful death, motor vehicle accidents, pedestrian injuries, fall downs, defective products and medical malpractice. Although in our practice he has been representing victims of personal injuries exclusively for 28 years, for five years he worked at a firm that represented insurance companies where he learned their perspective. Attorney Herrmann is a member of the Connecticut Trial Lawyers Association, the American Association for Justice (formerly the American Trial Lawyers Association), and the Connecticut and Hartford County Bar Associations. He is admitted to practice before all of Connecticut’s state and federal courts.

Attorney Herrmann is a married father of two daughters and lives in Vernon, Connecticut.

We meet people when they are under great stress.  They are in physical pain and facing problems they have never experienced before.  We have decades of experience in meeting these challenges.  Let us help.